Jacob Newbern found himself in the ER after experiencing tingling and numbness slowly making its way from his toes to his abdomen. Little did he know the start of what he now knows was GBS (Guillain-Barre Syndrome) would lead to a marriage proposal for the books.

After arriving in the ER unable to walk, Doctors quickly recognized the symptoms and began treatment. Jacob completed 22 days of rehab at Orange Park Medical Center's Inpatient Rehabilitation Center and made an exceptionally quick recovery.

"He improves every day. His positive attitude has everything to do with how quickly he has recovered," said Dr. Vorbes Aleger, Medical Director at Orange Park Medical Center's Inpatient Rehabilitation Center. "It's a scary condition and Jacob has fought hard the entire way."

One day before Newbern was set to go home he decided to celebrate his recovery in a big way, by proposing to his longtime girlfriend Mary Batar. During his last days of rehab he worked vigorously to gain the ability to stand again. With great intentions, Jacob kept his victory of standing a secret from his then girlfriend. When Mary came to visit one last time she opened his hospital room door to find Jacob sitting in a room flooded with rose petals on the floor. With emotions running high, he stood up and popped the question. Sandy answered with a tear-jerking "yes".

"I couldn't think of a better time to ask her to marry me than after we've been on this difficult journey. We have so much to be thankful for right now," said Jacob. 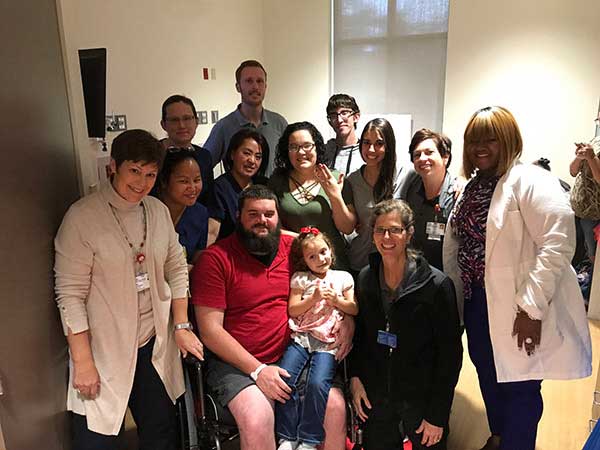 Jacob says he looks forward to getting home to spend Christmas with his new fiancé and their three small children, but he is sad to leave the family he's made at Orange Park Medical Center.

GBS is a rare disorder that quickly attacks the nervous system that can be triggered by a bacterial or viral infection. Symptoms start as weakness and tingling in the feet and legs and spread to the upper body, ultimately leading to paralysis if untreated.

"Early intervention is important with this condition. Because Jacob sought care early and our team reacted quickly we were able to avoid intubation which is a typical outcome for patients with Guillain-Barre syndrome," said Dr. Ronnie Bond, Neurologist at Orange Park Medical Center.

Jacob wants to share his story to spread awareness and help others catch the early symptoms of GBS.